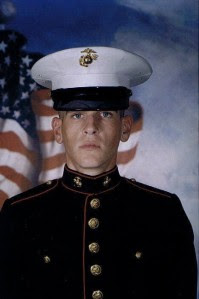 DETROIT — Renee Thurlow knew her 18-year-old son was sick when she talked to him about two months after he left for boot camp at Parris Island, S.C.
“You sound awful,” she told Justin Haase over the phone about a week before Christmas 2001.
Haase, of Macomb County’s Chesterfield Township, promised to see a doctor, but didn’t mention how exhausted he was or the headaches that made him cry.
One week later, he died of bacterial meningitis.
Now, nearly two years after Haase’s death, his mother has filed a lawsuit in U.S. District Court in Detroit against the Navy, two Marine sergeants, a Marine medic and a Navy doctor. The suit, filed last month, says an internal military report shows a series of medical mistakes hastened Haase’s death.
The lawsuit challenges a 54-year-old U.S. Supreme Court ruling that essentially says the military cannot be held responsible for the death or injury of active duty service members.
“That law has got to be changed,” Thurlow told the Detroit Free Press for a Tuesday story.
Maj. Ken White, a Parris Island spokesman, said a thorough investigation was conducted.
“We identified people who violated policy and we held them accountable for their actions,” White said.
Thurlow and her lawyers hope to show that a neglectful chain of events began when Haase arrived at Parris Island.
Haase missed the dose of antibiotics that recruits receive to ward off infections because he was allergic to penicillin. He should have received an alternative, but the Marines’ review found no evidence that he did.
Military doctors argue that the initial treatment would not have fought bacterial meningitis. The lawsuit claims Haase likely would not have become susceptible if treated upon arrival.
During a Dec. 22 training course that began at 6:30 a.m., Haase vomited and later began to cry.
A drill instructor took Haase to a military field medic who did not check his breathing, his pulse or temperature, records show.
Haase stayed in bed for most of the day. When he awoke that evening, he could barely keep his eyes open and was incoherent.
Just after 8 p.m., a senior drill instructor called 911 and said Haase had “taken a spill” during the training course. He was sent to Beaufort Naval Hospital.
A doctor initially focused on a possible head injury until a rectal temperature reading showed a 102-degree fever. A bacterial infection was suspected.
But Haase’s spinal fluid was not checked for more than another two hours. Healthy people have clear fluid. Haase’s looked like skim milk.
At 11:30 p.m., Justin received his first antibiotic treatment.
At 1:55 a.m. on Dec. 23, he was taken for a brain scan. Care for meningitis patients includes five methods to reduce or pre-empt brain swelling. None of those methods was used, medical records show.
Haase was again moved at 2:25 a.m. He spent the next several hours thrashing in bed and was put in restraints.
A nurse found Haase with fixed and dilated pupils at 5:30 a.m. He had suffered severe brain trauma.
Around 7 a.m. doctors prepared to fly him to Savannah Memorial Hospital in Georgia and called his family in Michigan.
Haase was pronounced brain dead at 3:16 p.m. on Dec. 23.
In early January, a one-page, unsigned letter from Parris Island arrived at the Thurlow house.
“What happened to your son,” the letter said, “was a freak accident that could have been prevented.”
Thurlow began her quest for answers.
Haase’s father, Don Haase, though angry and grieving, said it is difficult to blame the Marines.
“Clearly things could have been done differently,” Don Haase said. “At any point, they could have done something to save him and maybe the outcome would have been different.
“But at what point in time was it too late?”
Field medics at Parris Island now must consult a doctor by two-way radio when recruits are sick or injured. Drill instructors are educated about warning signs of infectious disease.
But Thurlow, who wears Haase’s dog tags around her neck, says the lawsuit remains necessary.
“It’s about stopping this before it ever happens again,” she said.
–From the Wednesday, August 20, 2003 online
edition of the Augusta Chronicle
AN OPEN
LETTER FROM RENEE THURLOW
Dear Military People and Nonmilitary People:
What you are about to read is one of the most important things you can do for yourself, your family and any future person who is to ever join the military. I will try to keep this short, but must explain some things first so you know this is not a farce.

My name is Renee Thurlow. My husband is in the military and in October 2001 our son joined the USMC. Our son never finished. He died a horrible death in boot camp on December 23, 2001. We are NOT placing blame on the institution. We need a strong military. We need one with honorable people in it. That is why we are trying to make it a safer place. Through these last two years we have found that many military people and people in general are under the misconception of being able to sue the government and not being able to sue the government.

I am going to pass on what we have learned. There are thousands of others out there like us who have lost children going to serve this country and the government gives us no help. They fill everything full of lies and cover-ups. We are not taking this sitting down. I am not some freaked out mother who cannot deal with the loss of her son. I am a PROUD mother and wife of two of my guys who serve/served this country like you do.

This could happen to you or one day if your child or grandchild goes off into the military it could happen to them. Those in our government will NOT help you. THIS IS ABOUT THE Feres doctrine. IT IS A DOCTRINE THAT PREVENTS ANY MILITARY MEMBER FROM SUING THE GOVERNMENT not for simple negligence but for intentional, deliberate or grossly negligent acts.
If you go to a military hospital and they cut off the wrong foot, oh well! Tough is what you will be told basically. Many of us have been busting our humps trying to change this. We KNOW if there were an ACCOUNTABILITY factor there would be almost no deaths due to pure grossly negligent or criminal negligence. Unfortunately, the only way to hold someone accountable for their individual wrongful acts if the government will not is through petitioning the federal court for redress of wrong. All of us who have lost a child would rather have our children back, but that is not going to happen. Many people out there have their children living with them because they were not taken care of medically (in a proper manner) in the military hospitals and these children cannot function on their own. This could one day be you or someone you know. We have the greatest chance coming up to change this forever.

WE CANNOT do it without the entire United States joining us!

NO Senator as of this date has stepped forth to stop the abuses under the Feres doctrine! This is unsatisfactory and they have their cushy jobs because of men and women who serve this country and they will not lift a finger to help protect you!

We want them to recognize that fact and care enough to make things safer for those serving this country. It is only right! It could happen to your child.

Justin’s story has been featured in People magazine December 15, 2003, issue and NBC Dateline is on the agenda. The problem of Americans dying due to the gross negligence and or wrongful acts and omissions of federal employees in our military is alarming! Since Justin died I know of at least 6 other deaths in boot camp alone and this does NOT include the ones who died at Camp Pendleton from Meningitis.

This is obscene that these kids are dying needlessly!

This is not just for those of us who have lost kids. It concerns the VA and the people who have served and have been thrown to the side. This is NOT a joke.

Just a FEW minutes of your time can help prevent the possibility of you or someone you love dying needlessly. Your voice can aid in changing the fact that abuses that are happening right here in our own country to our own men and women go unanswered and without any accountability to those who inflicted the injustice.

Our prayers and thanks go out to ALL of the military men and women who serve this country and to the families who know the deepest meaning of sacrifice and support.

Our prayers and thanks go to those who have been lost on the battlefield and to their families who know the truest meaning of loss.

Our prayers and hearts go to those especially who have been robbed of their family member through the abuses caused by an institution that promotes honor as one of their first attributes.
This is for you son – every tear and every heartbeat. I love you with all of my heart. “Until we meet at HIS feet.”

PLEASE PASS THIS ON TO EVERYONE YOU KNOW. MILITARY AND NON MILITARY. THANKS AND GOD BLESS ALL OF YOU AND YOUR FAMILIES

Gratefully,
Renee Thurlow
Posted by Redhen at 6:39 AM

"I told them, 'Hey, if you don't want to deal with mourning families, then recruit orphans."

"After the truth of Pat's death was partially revealed, Pat was no longer of use as a sales asset, and became strictly the Army's problem. They were now left with the task of briefing our family and answering our questions. With any luck, our family would sink quietly into our grief, and the whole unsavory episode would be swept under the rug. However, they miscalculated our family's reaction."

"...our treatment by the country for which our loved ones gave their lives has added another dimension of grief and difficulty. Having one another gives us the encouragement to continue."

"The greatest disappointment, is in our country whose leaders plainly have an agenda that values the establishment over the individual, form over fact, expedience over truth. All of us morn the loss of our loved ones, but we also morn the loss of respect that we all have had for our country."


"I will review these records to identify what led to [Phillip's] murder and the acquittal of his murderer," Esposito said Friday. "In fighting for justice for Phillip, my daughter and myself, I also fight for justice for all officers and servicemembers. No other family should have to suffer as we have." Siobhan Esposito

"Of the more than 274,000 officers and men who served in the army during the Spanish-American War and the period of demobilization, 5,462 died in the various theaters of operation and in camps in the a U.S. Only 379 of the deaths were battle casualties, the remainder being attributed to disease and other causes."

In 1898, thousands of soldiers got food poisoning from meat packed by Armour and Company and sold to the Army. There are no figures on how many of the five thousand noncombat deaths were caused by this.

The Oxford Companion to American Military History estimates that between 2 percent and 25 percent of the casualties in America's wars are attributable to friendly fire.